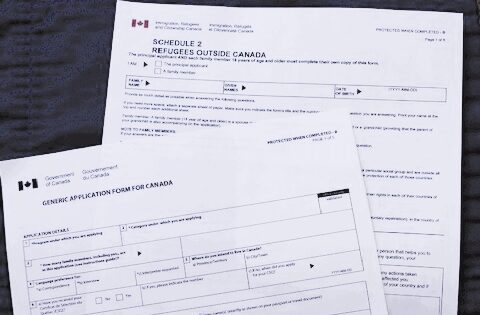 Although much of the discussion in the media about refugees concerns people who arrive at the border and claim asylum (Roxham Road, etc), in fact, the majority of refugees who come to Canada are pre-approved to receive permanent resident status on arrival. There are three requirements for a refugee to be privately sponsored to come to Canada: a sponsor; funding for the cost of settlement for one year after arrival; and, crucially, willingness on the part of the government to accept applications for sponsorship and process applications in a timely manner up to and resulting in final approval.

Sponsors may, in theory, be groups of at least 5 individuals, community groups, charitable organizations, or the government itself. However, individuals and community groups that are not registered charities face a major obstacle:  they cannot provide charitable tax receipts to donors.  In practice, therefore, registered charitable organizations are involved in most private sponsorships, either on their own or as co-sponsor.  (OCRA is a co-sponsor with the United Church of Canada.)

Private sponsors are required to provide the financial, social and emotional support needed by the sponsored refugees for their first year in Canada.

The government requires that sponsors provide refugees with 12 months’ income support at prescribed rates as well as a lump sum for start-up costs.  At current levels, the minimum settlement cost ranges from $16,500 for an individual to $32,265 for a family comprised of 2 parents and 4 minor children.

The cost of a private sponsorship for applicants depends on whether the application proceeds in the “BVOR” (Blended Visa Office-Referred) stream or in the “named person” stream.

When a sponsorship proceeds under the government’s BVOR program, the private sponsor and the government each pay 6 months of income support. (The private sponsor is responsible for all start-up costs.) Although the BVOR program is less expensive for sponsors, it has two significant limitations: first, it cannot be used when the applicant wishes to sponsor a “named person” such as a specific family member; and second, it is available only for refugees who have been referred to Canada by UNHCR.

The BVOR program was suspended at the outset of the Covid pandemic and was reinstated in May 2022.

For sponsorships that proceed in the “named persons” stream and not under the BVOR program, sponsors such as OCRA are required to fund the full cost of settlement.

The government has several levers for controlling the number of refugees admitted to Canada, the pace at which refugee applications are processed, the flow of refugee arrivals, and the countries from which refugees are admitted.

The government’s requirements for recognition of refugee status also impact the pace at which refugee applications are processed. Community groups or groups of at least 5 individuals (so-called “Groups of Five”) cannot apply to sponsor a specific named individual unless the individual has been formally recognized as a refugee, usually by UNHCR. This requirement for a prior refugee determination effectively prevents community groups or Groups of Five from sponsoring named individuals from the Middle East, Africa, and many Asian, Central and South American countries. (Community groups and Groups of Five are able to apply to sponsor refugees who are referred to Canada by UNHCR under the BVOR program; however, as noted earlier, the BVOR program is currently in abeyance.)

Sponsorship Agreement Holders, on the other hand, are able to apply to sponsor named individuals who do not yet have a formal refugee determination; however, these individuals must still be determined to be refugees in the course of the application process. This determination is made by Visa Office officials at Canadian Embassies.

Within this system, therefore, OCRA sponsorship applications for close relatives of refugee families who are already in Canada must proceed in the “named person” stream. Since OCRA proceeds as a co-sponsor with the United Church of Canada, a Sponsorship Agreement Holder, it is not necessary that named individuals we seek to sponsor have a prior formal refugee determination. However, before an application is approved, the individual being sponsored must be determined to be a refugee by Visa Office officials at a Canadian Embassy. Our applications, therefore, consist of two parts: an application for approval of the sponsor group and the settlement plan; and an application on behalf of the refugee for a formal determination of refugee status.

The onset of the pandemic has brought this already-slow system almost to a standstill.

UNHCR is not at present making any formal refugee determinations. As a result, there are no referrals to Canada. This, in turn, precludes any sponsorships applications under the BVOR program.

While we have been able to apply for named individuals as a co-sponsor with the United Church, the pace at which these applications are processed by the government is effectively controlled by the number and timing of “application spaces” issued to Sponsorship Agreement Holders and by the requirement for a refugee determination by Visa Office officials working out of Canadian Embassies abroad.

Compounding the complexity of this system is an almost-total lack of transparency. For an organization like OCRA, no information is available on the availability of “application spaces” and, once filed with the government, no information is available on the status of an application until the sponsored refugee is notified of impending travel to Canada.

Sadly, it is not uncommon for several years to pass from the initial filing of an application until approval and travel to Canada.