Afghanistan/Pakistan – Family of 5 – parents and 3 children

The parents and their 3 daughters, aged 13, 22, and 27, have been in Pakistan since shortly after the fall of the Afghan government. The father was a law professor at Kabul University and taught international institutions and human rights. He also worked for the Afghan government in various legal advisory roles and was in the Afghan cabinet as Minister of Disaster Management. The oldest daughter was pursuing a Masters of Law degree when the government fell. The 22-year-old was pursuing a psychology degree. This family was immediately targeted by the Taliban and their house was ransacked after the government fell. They escaped to Pakistan shortly after the fall of Kabul. They have very limited resources and currently live in difficult conditions as Pakistan does not provide rations or assistance. They cannot work or go to school in Pakistan, are liable to deportation for having crossed the border without a visa, and have no path to permanent residency or citizenship.

We completed the family’s sponsorship applications and were successful in having them expedited under the “Operation Afghan Safety” stream established by IRCC. The applications were submitted to IRCC on September 16th, 2022. The sponsors’ application to sponsor has been approved, and the refugee determination now needs to be made by the Canadian Embassy visa office in Islamabad.

Omar, age 22, has a civil engineering degree and was pursuing further studies in India when the Taliban overthrew the Afghan government. He is unable to return to Afghanistan as his father had worked with the UN and NATO and his family is under constant threat. While he was living in Afghanistan, Omar worked with the Afghanistan Rehabilitation and Development Agency, which supported women’s education programs and medical programs for LGBTQ. Omar has no path to permanent residence or citizenship in India and is not permitted to work or attend school.

We completed a sponsorship application and were successful in getting it expedited through the “Operation Afghan Safety” process. The application has been submitted to IRCC and the sponsor’s application to sponsor was approved in August, 2022. The next step is the refugee determination by a Canadian Embassy visa office in India, which we hope will also be expedited.

This young woman, age 20, was forced to flee with her family to Iran when the Taliban took over because her father had been engaged in legal work for international agencies. With OCRA’s help, this sponsorship was organized and funded by a group of young people in Ottawa, all of whom are themselves former refugees. We were successful in having the application expedited under the “Operation Afghan Safety” process. The application to sponsor was approved in November 2022 and we are awaiting refugee determination by the Canadian Embassy visa office in Ankara.

Afghanistan/Pakistan – Family of 4 – parents and 2 children

Both parents are doctors who worked in women’s reproductive health in Afghanistan. Their clinics were bombed and the father was shot after the Taliban takeover. They fled to Pakistan where they continue to live in fear. This application has been expedited under the “Operation Afghan Safety” process. Once we have achieved full funding, this application can be submitted to the Government.

This young woman is a physician who was prohibited from practicing medicine following the Taliban takeover. Her life has been threatened many times and she has barely escaped efforts to kill her. This application has been expedited under the “Operation Afghan Safety” process, but we are unable to file it with the Government until we have full funding.

This application is for the parents of the doctors above. They were able to escape Afghanistan after serious threats to the father, a civil engineer who worked for many years for UNOPS. We have received approval to expedite this application in the “Operation Afghan Safety” stream. The application cannot be submitted to the government until it is fully funded.

Cost of this application: $37,140 we are currently fundraising for this sponsorship

This Hazara family is now in Pakistan. Due to the nature of their work in Afghanistan, they continue to live in fear. OCRA is working with an Australian group to help get this family to Canada. The sponsorship application was submitted and approved in November 2022 and we are awaiting refugee determination by the Embassy.

Syria/Turkey – Family of 5 – parents and 3 children

Iran/Australia – Family of 5 – parents and 3 children

This family, from Iran, is currently in Australia. The family survived a harrowing boat trip to Australia after fleeing torture in Iran, only to find that the Australian government just weeks earlier had declared that no arrival by boat would ever be permitted to settle in Australia.  They have endured locked and community detention since 2013.

OCRA is working with an Australian refugee support group on this sponsorship, which went to the Church in March 2021. The application was filed with the government in September 2021, the earliest date “application space” became available. The sponsors’ application to sponsor was approved in January 2022. The family was interviewed by the Visa Office at the Canadian Embassy in March 2022 and is now eagerly awaiting security checks and for final travel authorization and arrangements. The family is expected to arrive in Canada in mid-January 2023.

Originally from Syria, this single woman in her early 20’s is currently is Lebanon. OCRA is assisting with the application by the family of this young woman wo is enduring increasingly fragile conditions in Lebanon where rations and allowances from UNHCR have been reduced. She is the victim of domestic abuse and is on her own in circumstances where there are significant dangers for young refugee women.

The application was sent to the Church in November 2020 and was filed with the government in September 2021, the earliest that “application space” became available. Our sponsorship was approved on March 15, 2022, and the refugee application was sent to the Canadian Embassy in Beirut. This young woman was interviewed in August 2022 and is eagerly awaiting medical tests, security clearance and final travel arrangements so that she can join her family in Ottawa. We are hopeful she will arrive in mid-January 2023.

Syria/Jordan – Family of 6 – parents and 4 children

OCRA is assisting with the sponsorship of this young family, originally from Syria. The family has close relatives in Ottawa. Conditions for refugees in Jordan have deteriorated greatly. The father lost his employment in Jordan when his employer refused to pay the increased fees for a refugee work permit levied by Jordan. Rations from UNHCR and charities have been cut so the father has been forced into covert work to feed the family,at the risk of deprtation if caught.

The application was provided to the Church in November 2020 but could not be sent to the government until September 2021 when “application space” was available. There is no indication when we can expect decision on the sponsors’ application to sponsor or on the subsequent application for refugee determination.

In December 2021, we prepared applications to sponsor and for refugee status on behalf of a mother and two children from Syria, currently in Irbid, Jordan, and for her son and his family. The father of the family was taken by Syrian intelligence officials in 2012 and has not been heard from since. The mother helped her brothers and sisters and their families shelter in Damascus during the bombing of the southern suburbs. She then fled to Jordan where she again helped to shelter her extended family. These applications were prepared and sent to the United Church in mid-December 2021. It is uncertain when the Church will have “application space” to permit filing with the government.

Anticipated cost: $60,000 we are currently fundraising for these sponsorships 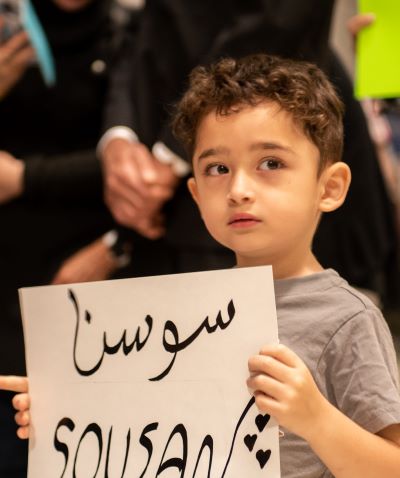 Conditions for Refugees in Jordan, Lebanon and Turkey are Deteriorating